Elon Musk gives his followers this right .. the fate of 10% of Tesla shares


Elon Musk gives his followers this right .. the fate of 10% of Tesla shares

Tesla CEO Elon Musk asked his 62.5 million Twitter followers in a survey if he should sell 10% of his stake in Tesla.

The world's richest person had previously said he may have to pay "heavy" taxes this year as he has to activate a large number of stock options maturing next year. 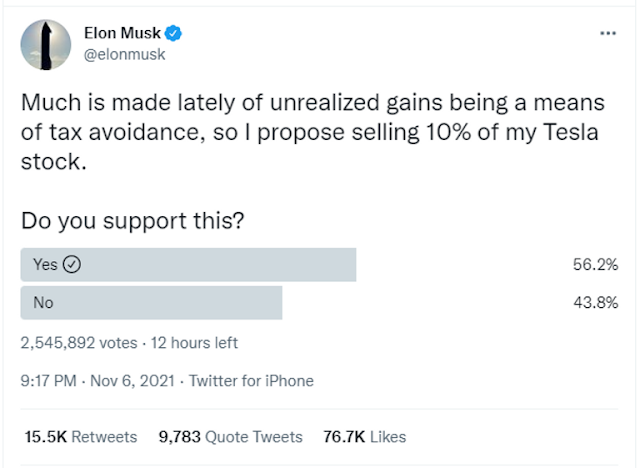 "For the record, I don't get a cash salary or bonus from anywhere. I only have shares, so the only way for me to pay taxes in person is to sell the shares," Musk, the founder of electric car maker Tesla, said on Twitter on Saturday.

The world's ten richest people .. Musk leads with a difference of 115 billion dollars over Bezos

Musk criticized a proposal by Democrats to tax billionaires, saying it would affect 700 billionaires and tax long-term capital gains on tradable assets, whether they are sold or not.

Musk said he would stick to the results of this poll, no matter what.

About 2.545.892 million people responded to the poll, 12 hours before the end of the poll, which is scheduled to end at about (2000 GMT) today, Sunday, and about 56.2% of the participants approved the proposal to sell shares, compared to 43.8% rejected.

Musk's stake in Tesla was about 170.5 million shares on June 30, and the sale of 10% of his shares would be worth nearly $21 billion based on Friday's close, according to Reuters calculations.

Top of the world's rich

The list of the world's ten richest people did not witness any significant change during the past week in terms of billionaires' ranking, but wealth witnessed major paradoxes.

According to Forbes' calculations based on the closing of US stock markets on Friday, November 5, 2021 (the last trading day last week), the list witnessed the top of the list, Elon Musk, CEO of Tesla, with a huge difference from his closest competitor, after his wealth jumped to record levels. .

Elon Musk, President of Tesla, continued to achieve his own miracle, as the new list confirmed that the American was at the top of the list of the world's richest people with record wealth.

Musk's fortune jumped to $318.4 billion, although his fortune fell by $1.9 billion at the end of yesterday's trading.

Thus, Musk became the only wealthy person in the 300 billion dollar club.

Continue Reading "Elon Musk gives his followers this right .. the fate of 10% of Tesla shares" on the next page To See More!